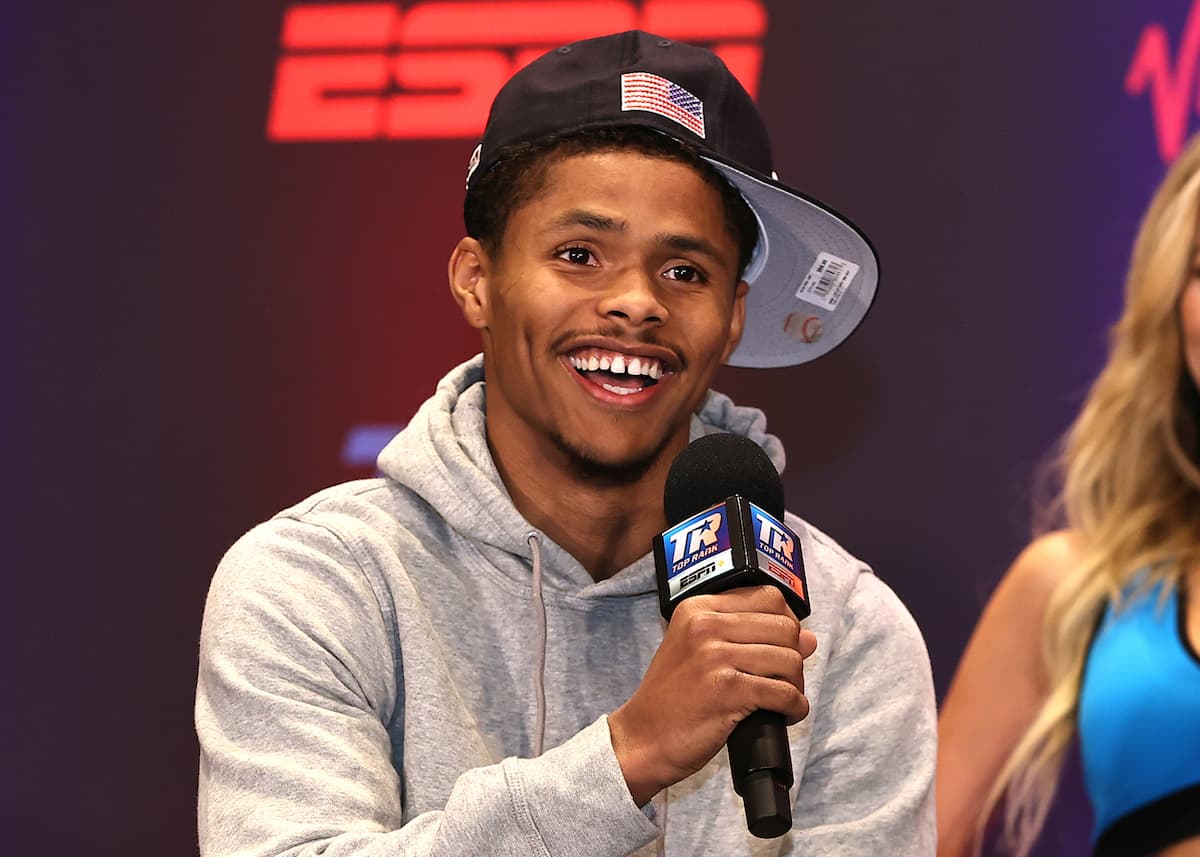 Shakur Stevenson ‘ready to fight’ Jeremiah Nakathila, who promises ‘to destroy him’

This will be Stevenson’s third bout at 130 pounds, and a big step towards a potential showdown with WBO junior lightweight world champion Jamel Herring or WBC king Oscar Valdez. Nakathila has won 10 straight fights, all by knockout, since the lone loss of his career.

In the 10-round junior welterweight co-feature, former two-weight world champion Jose Pedraza (28-3, 13 KOs) will fight Julian Rodriguez (21-0, 14 KOs). The winner will be in line for a potential world title opportunity.

Boxing fans can watch Shakur Stevenson vs Jeremiah Nakathila live stream on ESPN+ in the US, and on ESPN on Kayo in Australia. The main card start time is scheduled for 10 pm ET / 7 pm PT and 12 pm AEST.

Check out below what the fighters and Top Rank chairman Bob Arum had to say at the final pre-fight press conference.

Bob Arum: It will be a very, very exciting fight

“A year ago, when we started the ‘Bubble,’, you know who was the first main event? It was Shakur Stevenson. And now, thank God the Bubble is behind us. Shakur is the first main event we’ve done here in Nevada [at 100 percent capacity]. I’m very pleased that I’ve been able to do it.”

“Shakur knows that as his body of work increases, the fights get more difficult and the opponents are looking to knock him off. That’s the way boxing has been, and Shakur Stevenson, a lot of experts say he in the coming years will be the face of boxing. We’ll see how he does against a tremendous puncher that he’ll face on Saturday. Every fight at this level is a tough fight. Nobody is a walk in the park.”

“Nakathila will give it a go, and I think it will be a very, very exciting fight.”

Shakur Stevenson: I try to make sure I do what I’m supposed to do

“It feels good knowing that Bob thinks I’m the next superstar of the sport, and I have to live up to the hype.”

“I just feel like, when I’m at my best, it doesn’t matter who the opponent is. It’s been like that my whole career, since I’ve been an amateur. You don’t know who you’re going to fight in the amateurs. You come up and you just gotta fight people.”

“At the end of the day, I listen [to the hype], but you can’t get too hot. You still gotta complete the task. I try to stay in between. I don’t try to listen to everything I hear and go off that. I try to make sure I do what I’m supposed to do. My preparation was good. My weight is good. I’m ready to fight Saturday.”

Jeremiah Nakathila: I can knock anybody out in this 130-pound division

“First and foremost, I would like to thank Top Rank for the opportunity. I’m coming here for the big one. I never prepared like this for a fight. Come Saturday, I will show it.”

“Whoever underestimates me will be surprised come Saturday night.”

“All I know is I can knock anybody out in this 130-pound division. I can destroy anybody at 130 pounds. Come Saturday night, Shakur will see how I’m going to destroy him.”

Jose Pedraza: I have the experience and am well prepared

“Julian is a great fighter. He has a lot of power [and is] a young, strong fighter. But as you mentioned, I have the experience and am well prepared for Saturday.”

“It would mean a lot to join all the Puerto Rican greats to have won world titles in three weight classes.”

“After the loss to Zepeda, I focused a lot more on training and training styles that I’m going to show on Saturday, everything that I’ve been working on.”

Julian Rodriguez: I feel like that’s where I belong

“It’s a pleasure to be here once again. I’m grateful to have fought twice during the pandemic here, thanks to Bob Arum and Top Rank. It’s just another fight for me. It’s a big step up.I had a tremendous camp. Everything went well. No injuries, no nothing. I’m ready to go Saturday.”

“I had a lot of great sparring partners throughout camp, but when I was in Vegas, I sparred Yordenis Ugas, a big 147. I trained with Ismael Salas and all those Cuban Olympians, those southpaws. I’ve had hundreds of fights in my life. I’ve been fighting since I was 7 years old, so I doubt he’s going to come out with a style I haven’t seen before. And if he does, I’ll be ready for it.”

“There were a few hiccups with the injury that I had a few years ago, but I believe I’m on that top-tier level. A lot of people that were in my class growing up , the same age group, they’re world champions now. I feel like that’s where I belong, and that’s what I am going to prove on Saturday.”

The full Stevenson vs Nakathila fight card can be found here.

The post Shakur Stevenson ‘ready to fight’ Jeremiah Nakathila, who promises ‘to destroy him’ appeared first on FIGHTMAG.