The human voice registers in our brains like a warm blanket, wrapping us in comfort. If we get lost in the woods, the distant call of a stranger eases our fears. A loved one speaking assurances reminds us everything will be OK.

Similarly, the human face can move us one minute and infuriate us the next. Friend or foe, excitement or dread, an expressive mug generates familiar feelings.

Thursday at the Memorial Tournament, the voices and faces returned after a year’s absence. It was glorious.

I covered the Memorial in July when fans were not allowed on the grounds of Muirfield Village Golf Club. Just another COVID-19 sports casualty. It felt odd, like standing in the Horseshoe six hours after the Michigan game ends.

But having no crowds also offered some advantages, including getting from point A to B without sidetracking through point D. It was a nice change of pace. For about a day. As much as I enjoyed the 40-decibel singing bird concerts, not having the 60-decibel average output of the human voice — even the 90-decibel annoyance of “You da man” — made for a Memorial week lighter on drama.

The lack of faces didn’t help, either. Sure, there were some folks allowed to watch. A few volunteers and PGA Tour officials here and there. But if I wanted to watch golf without spectators I’d strap a cell phone to my cart when hacking it around my home course, then replay the video later over beers. No thanks. 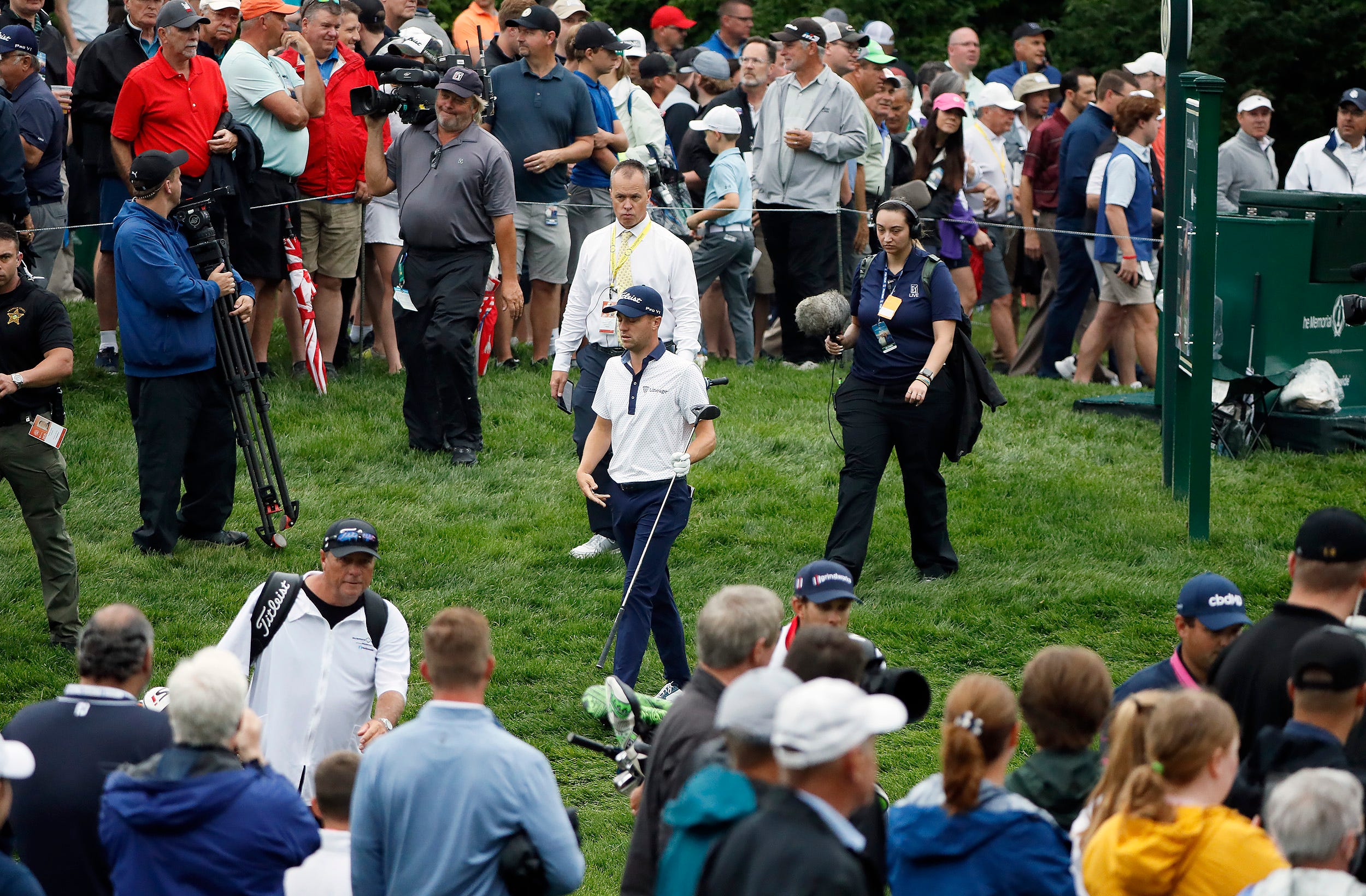 Justin Thomas walks off the tee box on the 15th hole while Memorial Tournament patrons watch on Thursday.

Muirfield Village was built to be a golf cemetery, where shots go to die, not a silent resting place for those buried 6 feet under. On Thursday, the dead came to life again.

Inside the ropes, the game went along as usual, most players quietly conversing with one another and plotting strategy with their caddies. But outside the ropes, and especially near the beer tents and tees, the hum of human activity cascaded across the course like cicadas, minus the buzzing mating dance. (Or maybe with? A sliver of the estimated 15,000 attending on Thursday focused on things — ahem — unrelated to golf.)

Mostly, the Memorial felt back to normal, complete with its traditional wet weather. Fans cheered and 9-year-olds wearing snapback hats, with snaps pushed to their limit, caromed around the course like Titleists off cart paths.

What did the Tour players think about having customers to entertain again? Depends which ones you asked. Also depends on how many were willing to tell the truth. The dirty little maybe-not-so-secret is that players got used to playing in front of empty lawn chairs. Many even liked it. Less pressure. Less hassle.

“The players all said, ‘Hey, we don’t need to have any fans around, this is great,” Nicklaus said, chuckling. “I understand that. But you also understand who pays the bills. The guys are welcoming people back.” 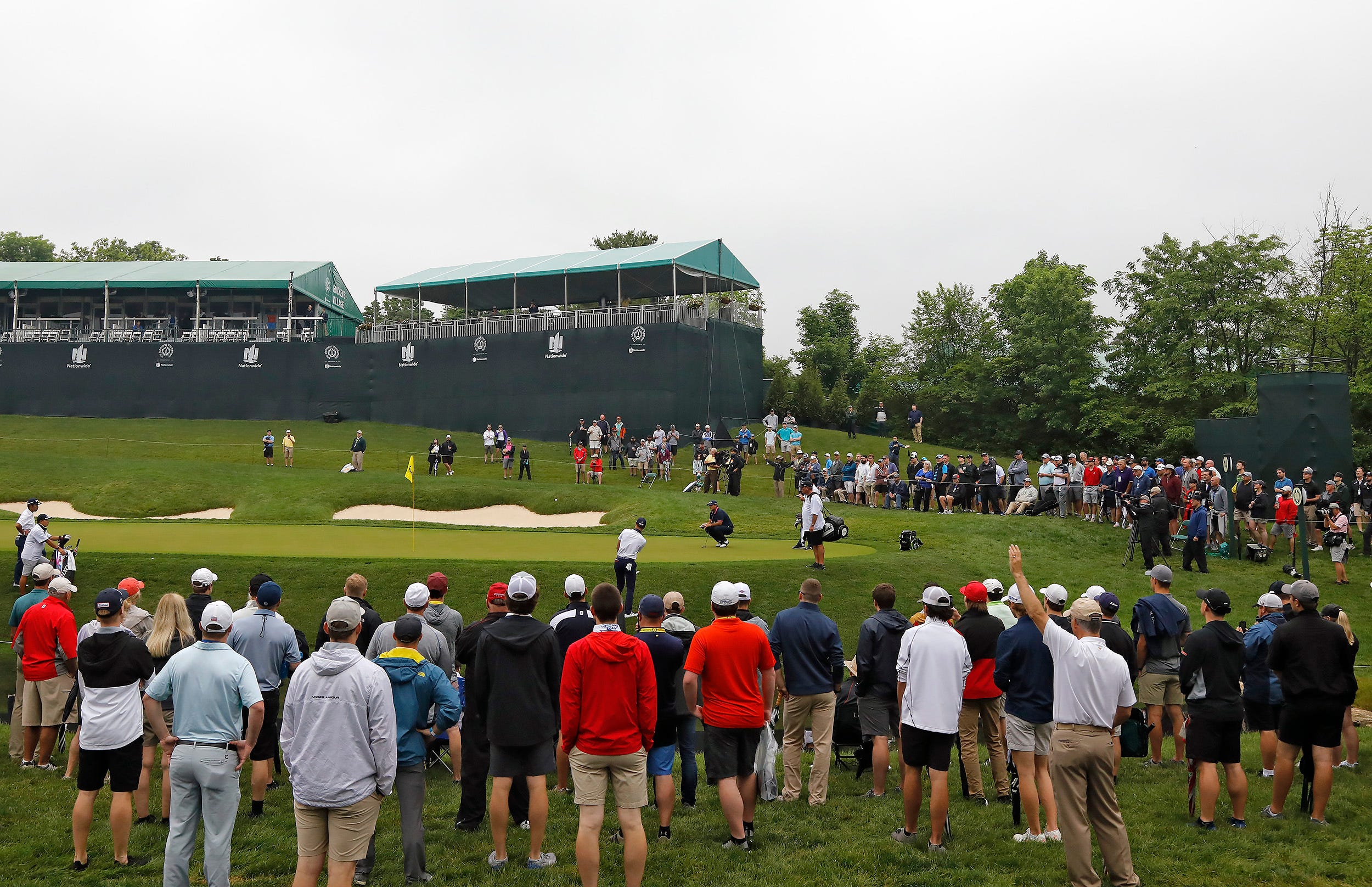 Justin Thomas chips onto the green on the 14th hole as patrons watch during Round 1 of The Memorial Tournament at Muirfield Village Golf Club in Dublin, Ohio on June 3, 2021.

They have no choice. As Memorial defending champion, Jon Rahm explained it, “Whether we like it or not we need to adapt to it. Jack (Nicklaus) told me this: one thing a golfer has to be is adaptable to the atmosphere. To the course. To the weather. To everything.”

“It was a big challenge to me when the crowds stopped,” he said. “I didn’t play well until the Memorial. It was hard sometimes to take it seriously because you were just out there with your buddies. No fan feedback. It was extremely weird. I finally got used to it and played really good golf, and now we have to get used to it the other way again.”

Xander Schauffele grew up playing golf in San Diego, where public courses and even country clubs major in being chill. One might assume Schauffele would prefer a more casual vibe of no spectators. Quite the opposite.

“For me personally it’s very refreshing to have fans back,” he said. “When you hit a good shot you have that affirmation of someone clapping or saying something — besides your caddie giving you a fist bump. It does feel normal again.”

Rob Oller is a columnist for the Columbus Dispatch, part of the USA Today Network.