FAIRFIELD, Conn. – Dana Ebster wasn’t sure what to make of the interview area on the porch at Brooklawn Country Club.

“Can we practice first?” she asked as she gingerly stepped up toward the mic. Ebster, by the way, rocked the interview.

Just before Ebster flew across the country to Connecticut, she was up at 6 a.m. pulling carts out at Turlock Golf and Country Club in central California where she runs a junior clinic and works in the pro shop.

The members came together to raise money for Ebster to make the trip. She got in the field at the 3rd U.S. Senior Women’s Open as an alternate and now co-leads at 5 under with LPGA Hall of Famer Annika Sorenstam. Ebster ended her round with a hole-out for eagle on the par-5 11th from 115 yards with a knocked-down 9-iron.

One of the best interviews you’ll see this year!https://t.co/fz0nrK59bq

Sorenstam makes her debut at the Senior Women’s Open as a favorite despite taking off 13 years of competitive golf. In February, she made the cut in her first LPGA start since 2008. Sorenstam is expected to be on top of the board; Ebster is “just excited to be here.”

It’s the perfect balance of what a Senior Open represents: a celebration of greatness, of lifelong careers and an unquenchable love for the game.

Sorenstam runs junior events all over the world as part of her foundation and has the top award in college golf named after her; Ebster runs a junior academy and coaches at Modesto Junior College, where daughter Makena, 18, will be a freshman this fall. 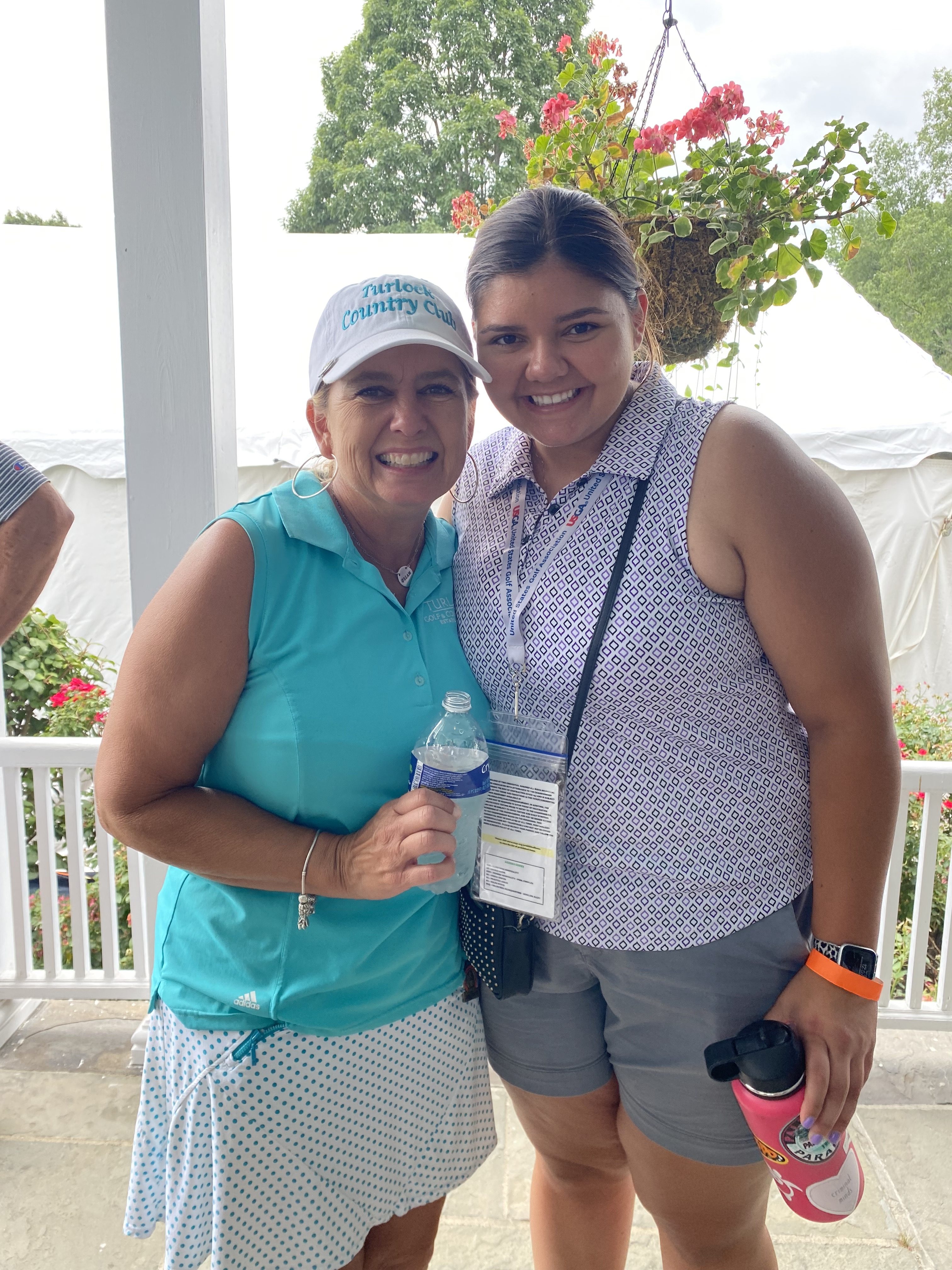 Ebster, who played at USC and on the LPGA in the 1990s as Dana Arnold, typically works on her game on Fridays during the ladies’ league at Turlock.

“Hopefully they will still invite me to the Ladies Invitational,” she said, “because that’s the most fun.”

When play was called for the day at 5:15 p.m. EDT on Thursday due to inclement weather, eight players had finished under par for the day, including 2018 USSWO champion Laura Davies (1 under) and amateur Ellen Port (1 under). Kris Tschetter sits alone in third at 3 under. Sixty players had yet to finish.

Sorenstam won 72 times on the LPGA, including 10 majors and three U.S. Women’s Opens. She used to hold on to bad shots and let them fester. Now that golf isn’t even a part-time job, she’s easier on herself.

Sorenstam hit 17 greens in Round 1 and ranked second in the field in driving distance behind Davies. She recorded only one bogey on the par-5 11th.

“I think the attitude is better for me than before,” said Sorenstam. “I did look at the leaderboard a few times, but I used to stare the leaderboard down. I don’t do that anymore.”

Ebster, 51, didn’t mind staring at the board. In fact, someone in her group likely took a picture. There’s a precious photo from the 2000 U.S. Women’s Open, Ebster’s only appearance, of her husband on the bag with their young son Christopher beside him.

Now it’s Christopher on the bag this time. Ebster recreated the shot earlier this week. 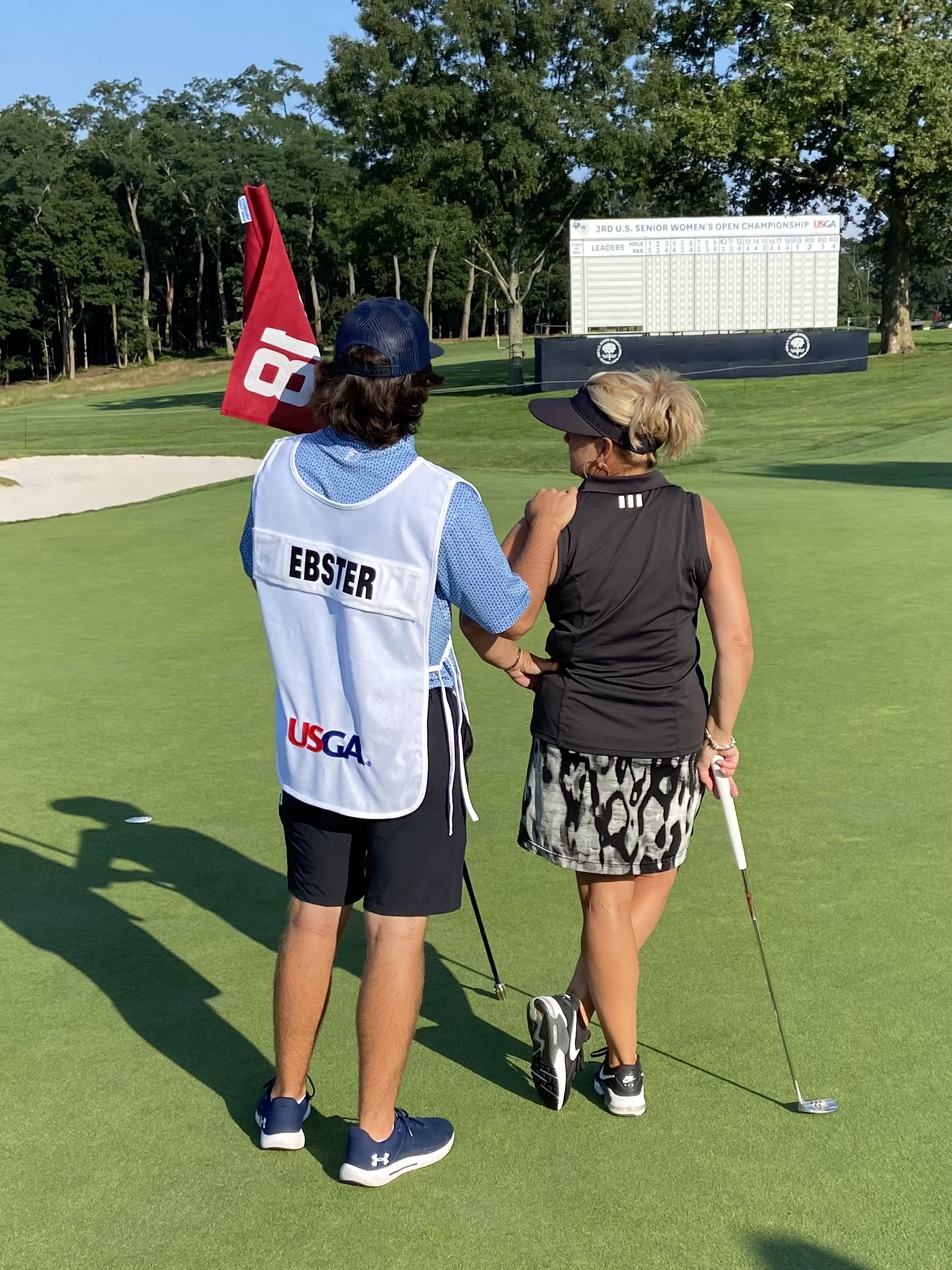 Dana Ebster and her son, Christopher, pose on the 18th green. (courtesy photo)

“I’m one of those people that I always tell my players, I go, ‘Don’t get nervous,’ ” said Ebster. “This is what you worked hard for. We worked all of our life to be in this moment. You know, as a kid, on the putting green, this putt is for the U.S. Open.

Sorenstam has husband Mike McGee on the bag at Brooklawn, and their two kids arrive on Friday. With television coverage not starting until the weekend, son Will most likely lived on the USGA’s live scoring page. This evening, he’ll want to go over the round shot-by-shot with mom.

She looks forward to it. With Sorenstam once again on top of a leaderboard, it feels like old times. But as Will and Eva remind us, so much has changed. 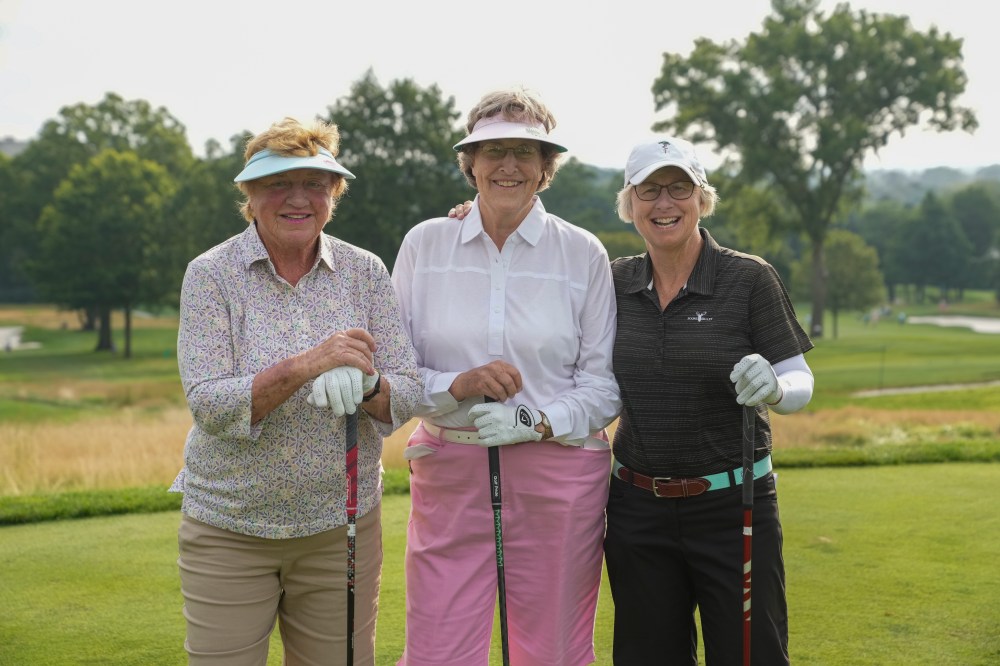 JoAnne Carner, 82, returns to 3rd U.S. Senior Women’s Open with a cart, a cigarette and a goal of making the cut