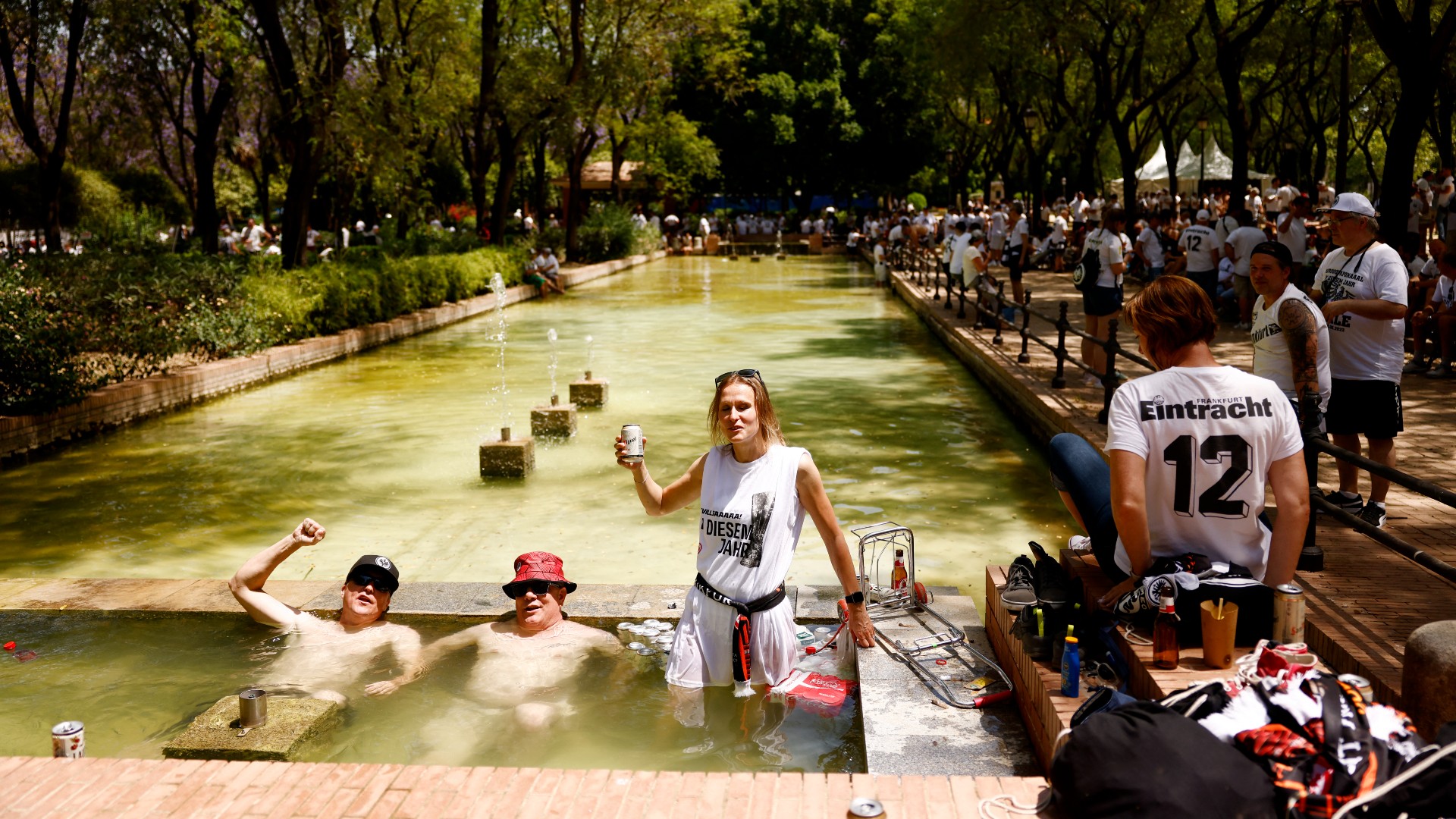 Sevilla are you ready: Fans clashing, flairs thrown, arrests made ahead of the finals

The game has not yet started, but everything else did: the media hype, the press conferences, the trainings and the fans clashes. Hours before the Europa League finals in Seville, the streets of this beautiful Spanish town are filled with Glasgow Rangers and Eintracht Frankfurt fans, who are soaking up the sun, enjoying the day, looking for any available tickets, or are just out to make a mess. Five Eintracht Frankfurt fans were arrested in Seville on Tuesday night after an attack launched on Rangers supporters. Several police vans were called at around midnight to neutralize ugly scenes in the center of the Spanish city where glasses, flares and tables were being thrown. There were no serious injuries, a police statement confirmed on Wednesday, although one Rangers fan sustained a head injury. One flare landed inches from the spot where the Rangers supporters were standing, near to Irish bar O’Neills on Paseo de Colon. One Rangers supporter could be seen picking up a glass and throwing it in the direction of the German hooligans on the other side of the police line. But police said the problems had been started by around 200 Eintracht Frankfurt fans who had started attacking Rangers fans by Seville Cathedral. Disturbios entre hinchas alemanes e ingleses📹 Paseo Colón, Sevilla pic.twitter.com/MkdJJCuJpP— SocialDrive (@SocialDrive_es) March 10, 2022 Apart from crowd trouble, there are some abuses on the streets to. Some Rangers fans taunted and insulted German fans by singing the banned song ‘10 German Bombers’. The song refers to UK’s Royal Air Forces actions against German bombers during the Second World War, but the England Football Association has warned England fans that they face punishment if they sing the ‘discriminatory’ song at international games. Yet, a group of Rangers fans changed the words from the ‘RAF from England ‘ to ‘RAF from Britain’ and sang in on the streets of Sevilla. They also sang offensive songs with words like ‘F—- the Pope and the Vatican’, aimed at the Catholic supporters of Eintracht Frankfurt.Africa will be cheering for Rangers in tonight’s Europa League finalsUp to 100,000 Rangers fans and at least 60,000 Frankfurt supporters are expected to have followed their teams to the final, raising concerns about security. Frankfurt fans clashed with West Ham fans in Seville when the former were playing Real Betis and the latter Sevilla in March. Rangers’ last European final the 2008 UEFA Cup against Zenit St Petersburg in Manchester was marred by violence as 39 people were arrested and riot police called in.Every Saturday We Follow 💙🇪🇸🏆 pic.twitter.com/eeXSiOdYlB— Rossco (@Rossco5055) May 18, 2022 Police hope to separate fans without tickets for the match on Wednesday night. Rangers fans not attending the game will be able to watch in a fan zone at La Cartuja stadium, located on the outskirts of Seville and nine kilometers from the Ramon Sanchez Pizjuan. Ticketless Frankfurt supporters will be urged to congregate at the Prado de San Sebastian, closer to the center but six kilometers away from La Cartuja.🎥WATCH: There are also around 50,000 Eintracht Frankfurt fans in Seville🇩🇪Our reporter @GabsAzzi spoke to some supporters who were finding unique ways to stay cool in the Spanish sun!☀️💦 pic.twitter.com/uNvDSi16rb— Clyde 1 Superscoreboard (@ClydeSSB) May 18, 2022